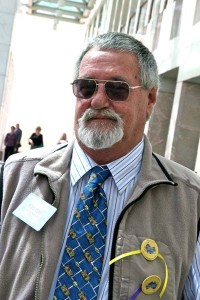 Hi, my name is Jim Myers. I am from the Northern Territory. I was raised in institutions from four years until I was 18 years old in Victoria, I think it was five institutions all up. I am here today because I do think an apology is necessary, but I also think that there has to be a lot said about why, what happened in all the orphanages, the government never followed up in the early days when they were supposed to.

In my situation I was put into a home at four years old because my mother couldn’t afford to keep me, feed me, clothe me, whatever. So the government of the day made me a ward of the state and put me into Catholic care. When we were put into the orphanages, the government didn’t have a follow-up scheme where they could check on those individual children – or me in this case – and they didn’t have a follow up on what was actually happening in the orphanages. Because as far as I know there was no records kept of actually what actually happened to you – and if they were, we are finding out today they were destroyed either by the church or by the government – or maybe they didn’t even receive them.

Now the difference between state and church, it’s nearly impossible to get church records of what they did to you and what happened to you in the homes. The state government, you can get information through the freedom of information but at the same time they blank out a lot of pages or they mark them out black. You know, it’s a no-win situation, you are not getting your full story which you want.

I think hopefully after today if the government have decided to do this apology, which I think they are, there needs to be a follow-up in what actually happened with all the records and make them accessible to all the children like myself who need that information to just keep going on.

I didn’t have a real bonding sort of thing, like in the homes as you got older, say about nine or ten, you started to develop yourself. I maybe remember one or two people. Every now and again I think of them and wonder what they are doing, but I have never sort of chased up. I was hoping maybe I might see someone today or hear a name that I remember from those days. There are a couple of people I would like to meet today – there are only about two people out of the whole lot. The rest of them I never carried on or had a relationship sort of to go on about that. They didn’t encourage it a lot of the time either. They sort of made you individuals so they didn’t like you hanging around in packs because they didn’t know what you were going to get up to.

My escapism is what I did – I used to be like to be on my own. I still do to this day. I prefer my own company to a lot of people’s company. I can put up with people for 10 or 15 minutes, then I just disappear. I did it last night at the dinner. I just had enough of everyone talking and everything like that and hearing the stories, and I just said, ‘I can’t handle this any more,’ and got up and walked out.

I don’t think the apology itself is going to do very much for me at all. Maybe a few of the people inside, they all have their own agendas, they all want something from it. When you feel the electric shock treatment I used to get and stuff like that, you know, an apology can never do anything for you. And the denial that has always been coming out, you just wonder what’s happening. You just don’t know it’s going to be good enough, just an apology, because none of the stories really are going to surface to the top.