Listen to author Al ‘Crow’ Fletcher talk  about his experiences at Westbrook Farm Home for Boys.

Al joined Adele Chynoweth at the National Museum of Australia in Canberra on 1 September 2011. He is the author of Brutal: Surviving Westbrook Boys Home by Al Fletcher as told to Cheryl Jorgensen.

Hear Al Fletcher’s perspective as a survivor or read the transcript on the National Museum website.

The Westbrook Family Fun Day will be at Centenary Park, Barwick Street, Westbrook on 21 October 2012. This date will align with Family Week in Toowoomba. Our Family Fun Day will have all the usual free things. Free jumping castles, free music, free rides, marquees, tents, stalls, affordable food, interactive skate ramps, tool time building for families, KIDZ zone – with all the messy goop – our theme is ‘Celebrate our Community’. BBQs, food stalls, shaded area – all these and much more. The local businesses financially support the day and we promote them.

It would be an honour to have any survivors from the Westbrook Boys Home to be there on the day. This may be a lot to ask of you – but the offer is there.

Sally Pryor, from The Canberra Times, reported on last week’s talk by Alfred Fletcher, author of Brutal: Surviving Westbrook Boys Home by Al Fletcher as told to Cheryl Jorgensen, at the National Museum of Australia.

Former inmate of Westbrook Farm Home for Boys, Alfred Fletcher, will speak at the National Museum of Australia on Thursday 1 September 2011 at 12.30 – 1.30 pm, in the Friends Lounge.

Alfred Fletcher was sent to Westbrook Farm Home for Boys in Toowoomba, west of Brisbane, in the 1960s.  He was 15 years old.  He lived there for two and a half years until he succeeded in running away.  He likens his time there to living in a concentration camp. He endured floggings that tore his flesh, torture and abuse.  Al records his experiences at Westbrook in his book, Brutal: Surviving Westbrook Boys Home by Al Fletcher as told to Cheryl Jorgensen which was published in 2006 and re-released in 2010. After Al escaped from Westbrook he worked as a merchant seaman and horticulturalist.  He married, has grown up children and now lives in a Bayside suburb of Brisbane. His story is one of many that will be included in the upcoming NMA exhibition Inside: Life in Children’s Homes. Westbrook was established in 1900 by the Queensland Government to reform boys. In 1994 there was an inquiry into the operation of Westbrook and it was closed down.

‘The Superintendent said, “Don’t look at me in that tone of voice”  and banged boy 90’s head several times against the tin wall’. Read the full 1961 report of the Inquiry into Westbrook Farm Home for Boys by Stipendiary Magistrate, Mr AE Schwarten.

The report was conducted after an ‘incident which occurred on Sunday, 14th May, 1961, at the Farm Home for Boys, Westbrook, in which approximately 36 inmates of the said Home were involved and number of whom escaped’.

The report was provided to the National Museum of Australia by Al Fletcher, author of Brutal: Surviving Westbrook Boys Home by Al Fletcher as told to Cheryl Jorgensen. The report has since been published online by the Queensland Government.

Following on from his autobiography, A Tormented Life, Warren Porter writes the story of his deceased brother, Graham Davis. Warren writes about their abusive stepfather, how Graham was sent to Westbrook Farm Home in 1961 and police violence. Warren argues the case for a Royal Commission into the treatment of children in Australian institutions.

Warren mentions several locations in the south side of Brisbane including “the Gabber (the Five Ways)” which refers to the then layout of the railway yards in the suburb of Woolloongabba.

In 1950 Brisbane City Mission made this film about Westbrook Farm Home in order to promote its charity.

Al Fletcher’s horrifying but sadly true story as told to Cheryl Jorgensen, Brutal: Surviving Westbrook Boys Home was re-released in 2010. With a foreword by former Senator Andrew Murray, this book can be purchased from New Holland Publishers. 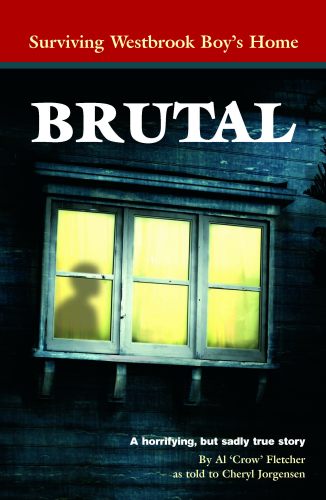 Read ‘Reap as you sow‘ on the Griffith Review site.

Warren and his younger brother Graham were placed in their first institution when they were 4 and 2 years old. They endured the next decade and a half in various institutions, training farms and – despite being under age – jail.

In telling their story, Warren includes evidence such as photographs and documents, as well as vivid descriptions and drawings such as the following:

It was around June 1959 when my mate Charlie and I were making plans to p*** off from the Brook but made the mistake of telling this new boy who wanted to come with us about what we were going to do.

To read more of Warren’s story, download the extract from his illustrated book (PDF 1.8mb). The book is now in the National Library of Australia.