Wayne (Hank) Edward Lewis (illegally adopted – Cottrell) writes, “I changed my name back to my family name – “Lewis” after the death of my adopted parents and after finally the archaic “Adoption Laws” were changed at end of 1993, and I was finally able to find my natural family only to find my Natural Mother had died in a state of depression 20yrs prior – she came back to Australia to try to find me, with no luck, I felt deprived, because of those Adoption Laws!” END_OF_DOCUMENT_TOKEN_TO_BE_REPLACED

Janice Konstantinidis was an inmate in Mount Saint Canice, Sandy Bay, Tasmania, where she worked as an unpaid child labourer in the Good Shepherd Sisters’ commercial laundry. Janice now lives in California in USA. Here, she shares one of her recent poems. END_OF_DOCUMENT_TOKEN_TO_BE_REPLACED

The University of Melbourne, in 2009, acknowledged its prior use of children in orphanages as human guinea-pigs in medical research. Read Tom Thompson’s recollections of men in white coats giving him injections at a Children’s Home in Parkville, VIC.

Tom, who never owned a picture of himself when he was a child, received the image below just four years ago.

I’ve two scars on my left arm from medical testing of the antigen vaccination for the seed Salk Polio vaccine, done in the late 1950’s.

I don’t know the actual dates in which the different injections were given, as I’d never been to school or known what it meant for days of the week, months or years. I do however remember the events due to the pain and distress we endured.

I vividly remember being lined up before the men in white coats who came and gave the injections which blistered and caused so much pain.

Our life in the homes was strictly regimented and having strange men in white coats was something not to be forgotten.

I spent nearly 6 years in the Victorian Children’s Aid Society home at Parkville Victoria. Just across the road from Melbourne University and the Eliza institute in the same street of Parkville. Both institutions were involved in advanced medical research at that time utilising institutionalised children as guinea pigs.

Both institutions have acknowledged their culpability in this research and publically apologised, however like Dr Joseph Mengele who experimented on children in the concentration camps and was on the wanted list for (for over 40 years) and the Nuremberg trials over his barbaric experimentation on children, he escaped capture and prosecution and lived out his life in South America.

I believe these institutions and CSL [Commonwealth Serum Laboratories] should be tried for what they’ve done. Under law there is no statue of limitations on culpable homicide. The vaccine used in the early tests was contaminated and known to cause cancer and other health problems.

Some of the original ‘seed’ polio viruses that had been originally obtained from Salk laboratories in the United States of America in 1955 and used to manufacture Australian polio vaccines tested positive to being contaminated with SV40, and yet was still manufactured and utilised by these organisations on children.

Tests in the late 1950’s and early 1960’s confirmed that SV40 was potentially carcinogenic.

I live each day not knowing when or if I will fall victim to some unknown disease.

Governments, medical institutions and health authorities all shout loudly how we should trust them, as they know best, but like Joseph Mengele, the people time and places change, but things really stay the same.

The photo is me at an age I don’t know, it was given to me by Professor John Swan 4 years ago, and was taken at the home in Parkville. The Swan family took me out of the home for weekend visits over a number of years. The photo was taken by Dr Ailsa Swan (who has since died).

‘Polio vaccine tested at orphanages’ 2004 report  on the Age website

‘Vaccines tested on Australian orphans’ as reported in The Independent, UK, in 1997.

Singer/songwriter Christine Harms was admitted to Nazareth House, Wynnum, Queensland at the age of three and left when she was 13.  Her original song On Eagle’s Wings, recorded in Nashville, Tennessee, USA, is a reflection on her experiences in the Home.

See another of Christine’s tracks, Street Angel, on YouTube 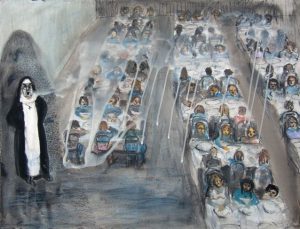 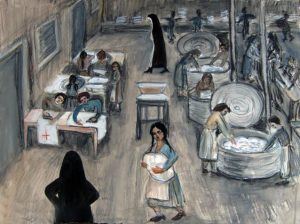 Stuck in a Void

Are we stuck in a void, toiling with the end and the beginning?
escape then is inevitable
Or, is it a wanderlust for new experiences?

Western Culture suffocates & retards my senses and the very essence of who I am
Where do I go?
Is it deaths door of which I am finally arriving at, no satisfaction with this existence, no joy in sharing my “true” life.

“She”
All my senses are alerted
By such a ballistic, turbulent chaos, so unsettling, and almost agonizing,
And yet so mysterious and alluring

But, without falter she continues to savage relentlessly to the end,
Only to slow such chaos for the ultimate caress of which still remains undivided. Joyous and so faithful and a never ending reliability that the very same secret devotion in which the sun rises and sets . . . . it is from the very depths of the ocean’s savagery that such delicate waves indubitably encounter the shore, with a gentle kiss.
This gives me so much strength, to know that no matter what the oceans wildest storm, the turbulence, the pain, the horror nor tragedy,
She blesses and transforms me with such courage and endurance, that through my own turbulence, I too will surely come to shore each and every time with a refreshed breathe of life, caressing the very existence of my horizons . . . . .

An English Manor, oh so Grand,
with an attic,
she used to frequent the attic,
from dawn till dusk,
draw she did.
A big woman, grey hair in a bun
not tight.
Pale skin, not a blemish.
Beautiful teeth,
Straight and just off white.
She smells of English rose perfume,
a gentle subtle fragrance.
She’s dead now, My Grandmother.
I never knew her,
I never met her, not once.
Wendy Sutton -Darwin 1986-

The Rose
It is a masterpiece of Nature
The perfect cup in which the rose bud is embedded, so striking and yet so
seemingly fragile,
but held sturdy via the gallantry of her thorny stem
Two polarities set to deter anything that would destroy the unfolding exquisiteness of The Rose,
such protection,,,,,, not even expected,
it just is.
Wendy Sutton 2002 New York City

It is watching the intensity of it all pass by me,
The escalation of the era, the history of which I dance within,
the dance that goes on,
and
the history changes day by day, to my titillation . . .
I smile with a passion quenched with adoration,
it has now come before me -in a manner of which- holds a glimpse of what is mere fetal,
thus, a touch of agony,
and yet,
an abandon creativity that sets me free to infiltrate, ready to explode

the particles of which fall, with a gentle cascade, softly, slowly,
oh the beauty
feel the sensation, become a part of the Universal force
only to succeed another existence,

At the age of twelve, Janice was taken by her grandparents and father to Mount Saint Canice, one of the Magdalene Laundries. The laundry was run by the Sisters of the Good Shepherd in Hobart, Tasmania. Now Janice lives in California, USA, where she enjoys writing and tending her beautiful garden. Here she shares one of her recent poems.

Buttercup yellow is the sun in brightest blue,
Dandelions, in paddocks, not green,
but browning and turning back to that dark earthy hue
and thickening of sounds are
cicadas and swarming bees,
and chirruping nests in trees
and winging insects fluttering honey
from marigolds, petunia and alyssum.
These are summer sweetness to me
and I lie face up.
The sun warms
my blood from the winter cold
into that deep warmth which is not the fragile one of spring.
I feel summer absorb me
and I record the growth of shrub and tree

This month, a US federal judge threw out of court a class action filed on behalf of an estimated 10,000 former Child Migrants. U.S. District Judge Paul Crotty dismissed the case because:

You can read more about the case at the Courthouse News Service website. Click on Ex-Child Migrants Missed the Mark, Judge Rules

In her short film In the Shadow of Eden, filmmaker Rachael Romero comes to grips with the physical, sexual and emotional abuse she suffered at the hands of her religion-fixated father while growing up in rural South Australia. The film includes Romero’s memories of her time in the Good Shepherd Sisters’ laundry at The Pines in Plympton, Adelaide.

In the Shadow of Eden premiered at the Yale Center for British Art in September 2003 where it won a Short Film Prize from Film Fest New Haven. Since then it has screened at the Cleveland International Film Festival, the Santa Fe Film Festival, Moondance (where it won the Spirit Award for short documentary) Boulder, Colorado and The Full Frame Documentary Film Festival in Durham, North Carolina where, with the help of The New York Times and a board that includes Martin Scorsese, Jonathan Demme, Ken Burns, and Barbara Kopple it was among six shorts chosen from over 100 ground-breaking documentaries available now on DVD – Full Frame Documentary Shorts, Volume 4, the best of the festival.

Ironically, given all these accolades in the United States, In the Shadow of Eden has been rejected for inclusion in the the Sydney, Adelaide and Victoria Film Festivals.

I wonder if, one day, the (mis)treatment of children in Australian institutions will be as well-known and as universally condemned as the 19th-century slave trade. It makes sense that a newly-discovered photograph of American slavery attracts such interest and wonder. But does it have to take 150 years to gain that kind of understanding? I hope not.

BishopAccountability.org is a U.S. website which plans to post all publicly available documents concerning the Catholic abuse crisis, specifically in relation to the U.S. bishops who have knowingly transferred abusive priests into other parishes and dioceses.