Helen Harms writes about her experiences and shares photographs from her childhood in Nazareth House, Wynumm, Queensland. END_OF_DOCUMENT_TOKEN_TO_BE_REPLACED

Silky Oaks Children’s Home was founded by the Open Brethren and first opened in Toowong, Brisbane, Queensland in 1940. In 1946 the Home was relocated to Manly. Former Silky Oaks resident Diane Tronc shares historical photos of the Home, her foster family and the Silky Oaks Reunion in May 2011. 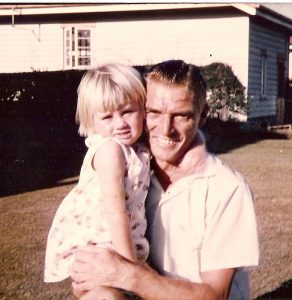 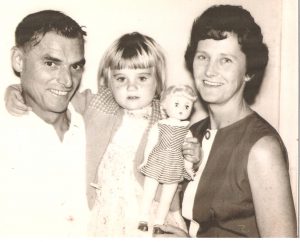 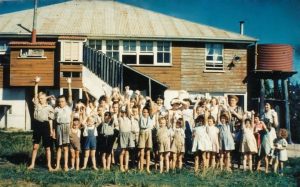 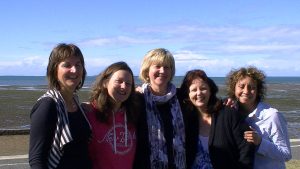 Poet Garry Shooks writes about the importance of marbles as currency in the Children’s Home in I’ve got the lot. In The House Without Keys, Garry writes about he and his fellow residents who don’t have access to the keys of the institution. Life’s a blur is a testimony to past experiences and what matters now.

I’ve Got The Lot

I never fudged or cheated, but I got the lot.
Tom bowlers, bird cages and cats eye’s are what we call em.

There marbles you know and they’re worth a lot.
For with em you are important and with out you are not.
I started with a couple and by golly I played till I had the lot.

The boys would moan cause I ended with the lot.
So I’d swap for what you got,

Weed draw a circle in the dirt, not to small and not to big, then throw in your lot.
You’d balance on the tips of your fingers at the circles edge and have a shot.

The birdcagess you’d swap the tom bowlers not, cats eyes not for they were worth a lot.
I filled a sack and was a great shot.

Till the day I lost the lot for sir cheated and took the lot.
I’ve never had another shot.

The House Without Keys

Halls are long, doors are many and all the doors have locks,
But we have not the keys to undo the locks.

We are young and scared standing in our lines in long straight rows,
Staring at our spot,
Wishing wishing we had the keys to the locks.

Sir would undo the locks.
Keys would jingle when he undid the locks,

Marched forward into the next spot till you hear the door close
And he’d lock the lock.

Line up beside your bed to kneel and say the Lord’s Prayer,
Into bed with out a whisper as trouble you did not want.

You’d hear the cries at times as we had been forgot,
In the end the tears you forgot as for love there was not.

The dreams were of the time that you could remember the family they said you had not.
Work was hard and the times you never forgot,

But the memories are painful and you try not to recall what you
Had not,
The birthdays came and went till the Key opened the lock,

Into the world that you had forgot, suitcase in hand, were are they now the brothers and sisters you had not forgot,

A life sentence in a place time had forgot, To this day I try to find my lot, the years have beaten me and the taste of sadness is with me a lot,

Cap in hand I go to the keepers who had the keys seeking the ones I had not forgot,
May the lord grant me time to get to find em as I have never forgot,

Forgotten Australians we are called, and yet I’m proud to be Australian, but the misery and pain has never been forgot,
Remember us as we fall for we were brother’s sister’s one and all.
We never ask for the life we got.

Scared and frightened I was as the policeman said listen hear you lot,
Mum will be back sooner then not,

The hours of the dark I cried a lot.
They called it a home but it was not.

Polish, sweat and spit was our lot,
Polish the floors on your knees with the rhythm of youth till your arms wanted to fall off.
Brass door knobs that you polished till they looked new,

You’d scrub the pots better then new to get out the burnt stew.
Nuggets the shoe’s, and polish, and rub with a bit of spit to clean the dirty spot.

Then if you were unlucky get to chop the wood for the boiler, and fill the coal bin like it or not.
The days were long, tears unheard for you were a ward of the state that was your lot.
Years came and went and I did grow.
I hate the bloody lot.

Old I am with tiredness of walking life’s path.

The years are shorter now and the memories hurt,
Tears of sadness have spoiled the lot.

Love your children they are worth a lot.

Here Gloria shares the speech that she wrote and performed in Memoirs of the Forgotten Ones staged in Brisbane, Queensland in March 2007.

Friends, I beckon you to come out of your darkness, your shell, your hell, no more are you there, to cower or cry.

You are alive anew with a free spirit; let it soar; soar high above the depths of despair. Take hold, have faith in what you do and what you are. You are no longer that timid little child to be used and abused.

You are strong now; you will speak up and out; you will be heard and justice ought to prevail. Keep on being strong; keep growing Friends, to the beautiful people you are now; and keep moving on.

Coming up in January in Sydney – live theatre performance of The Fence, a story close to the hearts of Forgotten Australians and Stolen Generations. Here’s the announcement from Urban Theatre Projects:

A portrait of love, belonging and dispossession.

The story takes place in the family home of Mel and Joy in Sydney’s western suburbs. It investigates the resilience and wisdom of five middle-aged Australians, four of whom grew up in care as part of the Forgotten Australians and Stolen Generations.

The audience will be seated in the backyard of a purpose-built house on-site in Parramatta, The Fence is the latest site-specific work from Urban Theatre Projects created in public dialogue with communities.

In developing The Fence, Urban Theatre Projects Artistic Director Alicia Talbot and cast spent have been working with 25 Indigenous and non-Indigenous Australian men and women who, like the characters, have had experiences of growing up in orphanages, foster homes and welfare institutions. Alicia acknowledges the community consultants as experts and together they have engaged in open dialogue that has informed the development of The Fence.

For more information, see the Urban Theatre Projects page about The Fence.