‘We were just whipped away; we didn’t know where we were going,’ says Carmel Durant, who grew up in Bidura Home, Glebe, NSW and with various foster parents. Read Glenn Ellard’s report in the South Coast Register about the chalk drawing Carmel made when she was ten years old.

Carmel’s drawing will be part of the exhibition Inside: Life in Children’s Homes and Institutions which opens on 16 November 2011 at the National Museum of Australia, Canberra.

You can read the 10 August 2011 report on the  South Coast Register website.

Juanita Maria Burr, nee Broderick, was a resident of Nudgee Orphanage, Queensland, from 1944 (the year of her birth) to 1961. Here she shares some recollections, including photos of her singing at the World Expo, 1988, Brisbane. 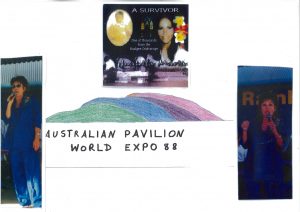 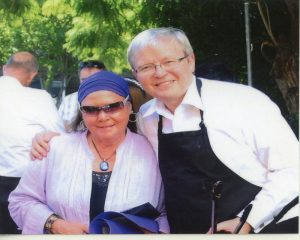 ‘The Superintendent said, “Don’t look at me in that tone of voice”  and banged boy 90’s head several times against the tin wall’. Read the full 1961 report of the Inquiry into Westbrook Farm Home for Boys by Stipendiary Magistrate, Mr AE Schwarten.

The report was conducted after an ‘incident which occurred on Sunday, 14th May, 1961, at the Farm Home for Boys, Westbrook, in which approximately 36 inmates of the said Home were involved and number of whom escaped’.

The report was provided to the National Museum of Australia by Al Fletcher, author of Brutal: Surviving Westbrook Boys Home by Al Fletcher as told to Cheryl Jorgensen. The report has since been published online by the Queensland Government.

The names of Child Migrants from Britain and Malta are included on commemorative panels erected in Fremantle by the Western Australian Museum.

More than one third of Western Australia’s population was born overseas. The Welcome Walls project pays tribute to those migrants who arrived by sea, landing at Fremantle or Albany, and to the many benefits they gave to their new home, enriching the lives of all Western Australians.

In Fremantle, over 400 panels commemorating the names of migrants who arrived through this area have been erected at the Western Australian Museum at Victoria Quay. These panels include information about Australia’s Child Migrants from Britain and Malta.

You can read details for each of the Child Migrants on the Western Australian Welcome Walls website.

Catholic Health Australia chief executive officer Martin Laverty says that he is prepared to apologise to the victims of forced adoptions, according to a recent report.

You can read the 25 July 2011 article on The Daily Telegraph website.

Another report on the ABC News website discusses responses to Archbishop Barry Hickey’s comments regarding adoption.

‘No longer a number – my name is Rosie’. Rosie grew up as number 20280. Her experience as a state ward left her with post-traumatic stress disorder. She’s now in recovery and a Remembered Australian and made a short film about her experiences.

Rosie Klohs’ film, Sins of a Child, was published on the Moving Minds page on the Mental Illness Education ACT website.

‘I conducted an archaelogical excavation of my past …’  Listen to Margaret Spivey talk about her autobiography Defying the Gatekeeper: One Girl’s True Story of Resistance and Rebellion.

Defying the Gatekeeper is published by JoJoPublishing, VIC.

Listen to an interview with Dr Michael Davey, former ward of the state and author of ‘Journey of Hope’, on ABC Radio National.

Dr Davey recalled his experiences in foster care and at Royleston Boys Home in Sydney during an interview on the ‘Life Matters’ program on 14 July 2011.

Journey of Hope is published by Arkhouse Books.

The University of Melbourne, in 2009, acknowledged its prior use of children in orphanages as human guinea-pigs in medical research. Read Tom Thompson’s recollections of men in white coats giving him injections at a Children’s Home in Parkville, VIC.

Tom, who never owned a picture of himself when he was a child, received the image below just four years ago.

I’ve two scars on my left arm from medical testing of the antigen vaccination for the seed Salk Polio vaccine, done in the late 1950’s.

I don’t know the actual dates in which the different injections were given, as I’d never been to school or known what it meant for days of the week, months or years. I do however remember the events due to the pain and distress we endured.

I vividly remember being lined up before the men in white coats who came and gave the injections which blistered and caused so much pain.

Our life in the homes was strictly regimented and having strange men in white coats was something not to be forgotten.

I spent nearly 6 years in the Victorian Children’s Aid Society home at Parkville Victoria. Just across the road from Melbourne University and the Eliza institute in the same street of Parkville. Both institutions were involved in advanced medical research at that time utilising institutionalised children as guinea pigs.

Both institutions have acknowledged their culpability in this research and publically apologised, however like Dr Joseph Mengele who experimented on children in the concentration camps and was on the wanted list for (for over 40 years) and the Nuremberg trials over his barbaric experimentation on children, he escaped capture and prosecution and lived out his life in South America.

I believe these institutions and CSL [Commonwealth Serum Laboratories] should be tried for what they’ve done. Under law there is no statue of limitations on culpable homicide. The vaccine used in the early tests was contaminated and known to cause cancer and other health problems.

Some of the original ‘seed’ polio viruses that had been originally obtained from Salk laboratories in the United States of America in 1955 and used to manufacture Australian polio vaccines tested positive to being contaminated with SV40, and yet was still manufactured and utilised by these organisations on children.

Tests in the late 1950’s and early 1960’s confirmed that SV40 was potentially carcinogenic.

I live each day not knowing when or if I will fall victim to some unknown disease.

Governments, medical institutions and health authorities all shout loudly how we should trust them, as they know best, but like Joseph Mengele, the people time and places change, but things really stay the same.

The photo is me at an age I don’t know, it was given to me by Professor John Swan 4 years ago, and was taken at the home in Parkville. The Swan family took me out of the home for weekend visits over a number of years. The photo was taken by Dr Ailsa Swan (who has since died).

‘Polio vaccine tested at orphanages’ 2004 report  on the Age website

‘Vaccines tested on Australian orphans’ as reported in The Independent, UK, in 1997.